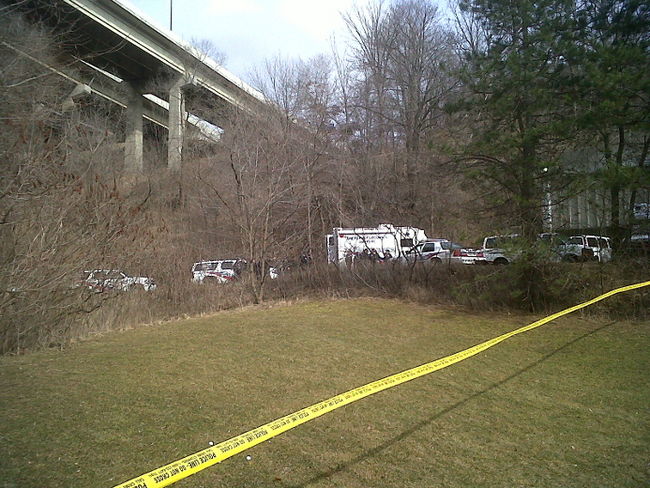 Friday March 16, 2012
Police closed off the 401 Eastbound ramp between Avenue Rd and Yonge St. to re-examine the area where Mariam Makhniashvili’s remains were found below on The Don Valley Golf Course on February 28, 2012

Ironically, my husband and myself were in the area today where Mariam Makhniashvili’s remains were found.  We had arrived as police were packing up to leave after they had re-visited the site again today for further investigations.  It was eerie that, we too, had wanted to be in that area today at the same time that police had gone back to re-examine that area, cordoning off a large section of the 401 Eastbound Collector’s lanes to do their investigation.

Still reported as being thought of as a suicide, one can only wonder why police were there again today since they are continuing to maintain that this was indeed a case of a disgruntled and depressed teen taking her own life.  Perhaps, they are readying themselves to dot their i’s and cross their t’s to put this case to rest in the near future?  Or, perhaps, public pressure is growing upon them to prove their hypothesis.  As the days go by and the public starts to digest the reality of this tragic loss, a lot of people are beginning to express that they do not believe that Mariam took her own life…especially, there and particularly, in that manner.

By now, it is most likely that there is very little, if any, forensic evidence still available that hasn’t already either been collected by police or has vanished with the ravages of weather, animals, people etc. in that area over the past two and a half years since Mariam went missing.

However, from a different perspective, it’s easier to see that a person, by foot, would have had a great deal of difficulty in not being seen getting onto the stretch of highway above where Mariam’s remains were found.

My husband and myself, drove from Mariam’s former home to the front entrance of Forest Hill Collegiate before continuining along Eglinton Ave West towards Yonge Street, heading east then, turning left beyond 120 Eglinton Ave East where Mariam’s backpack was found behind the building.  We also traveled along Roehampton Ave to 101 Roehampton where the backpack had originally been found but, allegedly, moved at some point within a two week period prior to police being notified of it being found behind 120 Eglinton Ave. East.

We then, drove west along Roehampton to Yonge St. and drove north on Yonge to the 401 over pass area where her remains were found below the ramp on the Don Valley Golf Club grounds.

Let me tell you that it was not by any stretch of the imagination, a short stroll to get to that area from where her backpack was found.  It was quite a distance to have walked.

Secondly, had Mariam taken TTC to have gotten to that area, 101 Roehampton and even 120 Eglinton Ave. East, is out of the way of the Yonge Subway entrances.  It’s extremely hard to fathom her having gone that far off of track to have gone past North Toronto Collegiate at 70 Roehampton then, double back to get to the subway entrance.

It makes absolutely no rational sense that Mariam would have left Forest Hill Collegiate, knowing she was going to end her life to walk that type of distance to do so.  Nor, does it make any sense whatsoever that she would have taken that detour along Eglinton Ave. East or Roehampton (the next street north of Eglinton and east of Yonge street, running parallel to Eglinton Ave East) before heading up Yonge by foot or via subway.  Something does not jive with this idea.

I am still formulating what I sense may have happened and will post that in another entry in the next day or two but, today was a sobering reminder that Police have work to do still and we hope that they won’t simply write it off as a suicide or, “misadventure”.

Be the judge yourself.  Can you see how this young woman would have manoevered her way along this highway to leap to her death without being noticed?