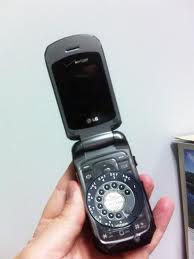 I have quite the quandry on my hands.  I am due for an upgrade on my cell phone.

Normally, that would be great news as I do love technology and learning new gadgets however, upon walking into a cell phone shop to look at the newest models, I found myself totally overwhelmed with the amount of selection available and set out to get help from a sales associate.

He was a nice young man who seemed to have a lot of knowledge and personality.  I figured that at least I’d made the right choice in someone to aid me in my quest.

“Ron” (the sales associate):  How can I help you today?

Me:  Well, I’m eligible for an upgrade on my cell phone but, I don’t know what I want yet and there’s so many to  choose from.

Me:  Basically, I just want to be able to make a call, check my email, have a camera, and…well….maybe, be able to get onto Facebook.

“Ron”:  Ok, so pretty basic features then so, every phone here will be able to do that for you.

Me:  Great, that narrows it down, Ron.

Me:  What’s the difference between the iphone, an android and a Blackberry?  I already have a Blackberry but, it might be time to change.

“Ron”:  Everyone has their preferences.  Some love their iphones, some their androids and some their Blackberrys.

Me:  Again, thanks Ron.  That narrows it down yet again.

“Ron”: (Another polite chuckle as he looks at his own android phone to see a message and quickly text back)

“Ron”:  Yeah but, I also have a Blackberry and love both for different reasons.

“Ron”:  Well, I keep my Blackberry for certain people to contact me and, I have my android for me…my personal use.

Me:  Explain what you mean by why the Blackberry for certain people and the android for your personal use.

“Ron”:  Uhhhmmm…uhhhhmmm….I like my android because it lets me watch sports, listen to music, and play games but, I like my Blackberry because if I want to write long emails, I can do it better on my Blackberry.

Me:  (Thinking we’re finally getting somewhere)  Ok, so the Blackberry is something that you use more for emailing and the android you use more as an entertainment center?

“Ron”:  Well, sorta…I write emails on my android too.

Me:  But, you just said that you prefer your Blackberry for your emails, why?

“Ron”:  I don’t know really.  I’ve learned how to swype on my android now so, it’s just as quick.

“Ron”: (Taking his android, the size of a small book, out of his pocket and making a finger gestures like a voodoo priest over the phone).  I can highlight the letters that I want to type and it will automatically enter the word…see?

He continues to show me words…though they’re all wrong and he seems to spend more time correcting them than anything else.

Me:  Uh-huh….but, it seems to be rather inaccurate.

Me:  But, you said that you can write emails just as well on this phone as your Blackberry.

“Ron”:  Well, yeah…when you get used to using the touch typing pad.  I need more practice at it.

Me: (Clearing my throat, getting a little antsy at this point)  Ok, Ron…let’s move on to the other features of the android.

“Ron”:  Oh, they’re so cool.  I can do this (again with the voodoo finger movements and several screens later).  I can sit in the restaurant and look up what movies are playing then, (more finger movements) I can watch the trailer for the movie to see if I want to go see it. (Flips phone sideways to show trailer playing).

Me:  Interesting, Ron.  What else can it do?

“Ron”:  Well, I can watch the sports replays if I miss the game while I’m at work and busy with customers.

Me:  But, won’t that take a large data plan to be able to do those things?

Me:  So, then in order to use all of these android features fully, I’d have to have a large data plan.

“Ron”:  It depends on how much of that you want to do.  If you want to watch and post Youtube videos, you might need a lot more.  But, you should see the Blackberry Playbook.

Me:  What’s the Blackberry Playbook?

Ron takes me over to a large tablet looking item and proceeds to show me all of its features.

Ron:  Yeah, but you can read books on it and it’s got an onscreen keyboard and….

Me:  (Cutting Ron off, mid-sentence)  Thank you but, I just want a phone.

Ron again texts someone on his phone again and another sales associate takes his cell phone out of his pocket, mid-sentence while with his customer.  I see the smirk and watch him move his fingers in the same fashion over his screen.  Ron looks back at his phone and smiles then, proceeds to type something back.

At this point, I’m sure that Ron and the other sales associate are having a great laugh about my own questions as well as that of his customer, another man, a little older than me, who is also seemingly asking questions.  I’m sure the conversation was comprised of one central message, “Old Farts don’t know what they want. Let’s sell them a house phone.”

Waiting while the two sales associates finish their little banter….I turn to see my husband taking his ancient flip-phone out of it’s holster clip on his pants belt and take a call.  It’s nothing more than a tiny screen with the numbers on the pad and walk away, talking happily, unconcerned about other features.  The phone was doing what we really needed it for, the ability to make a call.

My husband had blissfully finished his phone call unaware of even how to text someone and completely happy with his archaic dinosaur of a phone so, what was I stressing over?

The answer was so simple.  Forty-five minutes and several sly grins between two sales associates later, I realized that I already had what I needed and wanted.

Me:  Thanks Ron for all of your help but, I’m going to stick with the phone that I have.

“Ron”:  Ok, that’s what I’m here for.  If you change your mind, here’s a catalogue of our phones and what they do.

Forty-five minutes later, loaded down with pamphelets, a catalogue, a business card and feeling drained but satisfied, we crossed the street and hit Tim Hortons for coffee whereupon I realized that everyone was sitting with other people in the coffee shop, cell phones in hand, ignorning those they were with, to play with their phones.  Not one of them were talking to one another.  They were all busily texting, swpying, watching videos or tv, talking to others elsewhere and not giving the actual flesh and blood people they were with, so much as a glance, let alone a word.

It was then that it hit me that we are moving towards a world of technology where other humanbeings will all become cyber avatars on cell phones.  We’re literally carrying around our lives on these things.

I turned to see one young man, doing banking on his cell phone.  He was transferring money over to someone else and it became apparent that he was transferring $10.00 over to the guy, sitting right across the table from him to pay him back for the lunch sandwich and coffees they were eating.

My husband reached into his pocket, pulled out his wallet and paid for our coffees with a crisp $10.00 bill.

We then went on to talk about other things and enjoy our time out together.

Sorry that I wasted your time “Ron”.  While I may be old enough to be your mother, I’m far from stupid.  I recognize that we are missing out on human contact with all of these expensive gadgets.  I’m both old enough and yet, young enough to realize that human contact is still the best thing in the world for us.  And, I’m sticking to that idea.