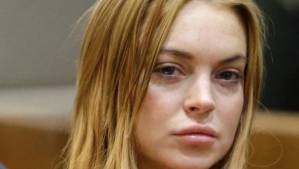 In spite of having arrived almost an hour late for her court appearance, Lohan’s irreverence for the judicial system was bypassed and yet again, escaped a jail term.  Lohan seems to have escape powers that even Houdini couldn’t have gathered.

Lohan pleaded no contest to the charges of reckless driving and lying to police then, plea bargained her way into 18 months of psychological therapy, 30 days of community service and 90 days of locked-down rehab.

It is reported that Lohan feels no need for rehab but, struck the deal because it was a better bet to be kept under lock and key in a swank, posh, rehab center with all of the ammenities at her beck and call than going into a jail cell.  Lohan knows how to play the system to her advantage even when the odds are stacked against her.

Lohan managed to escape a contempt of court charge as well after having chosen to skip her pre-arranged flight back to L.A. from NY which would have seen her back in time for her court appearance.  Instead, she chose to stay behind and party at a club.  Reportedly, after scrambling to reschedule on a second flight, Lohan left the plane, citing she felt it “unsafe”.  Turned out that Lohan was right as there was a minor fuel leak which saw the plane have to make a pit-stop to re-fuel.  However, taking yet a third flight via a private jet, courtesy of pal, Mr. Pink, cut her time short and she entered the court nearly an hour late.

If that wasn’t enough for the star who couldn’t seem to keep her eyes open during her court appearance after her self-chosen, luxury red-eye flight, she was hard-headed enough to try to get to a night club in Hollywood several hours after having been sentenced to a 90 day lock-down rehab stay that she doesn’t feel that she needs.

Paparazzi short circuited her plans with extra coverage and attention, causing her to not be able to enter the club.

What will it take for the courts to realize that this young woman is feeling herself above and beyond the powers of the law and slap her wrists with cuffs, shoving her behind bars?  Is Lohan invincible?

Next infraction, and there’s sure to be another one, some judge had better grow a pair and stick this woman in a jail cell to learn her lesson the hard way or, there could be serious consequences for someone else.