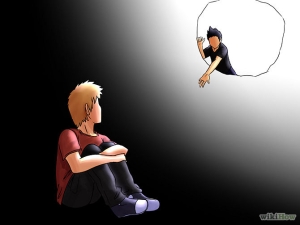 I admit it.  I am a “Helpaholic”.  I cannot stand knowing that someone is in trouble therefore, I put on my heroine cape and go leaping in to try to rescue them from the perils of pain.  The smallest whiff of someone being in trouble is enough to turn me into a wonder woman who will turn the world on its side if I think that it might help someone.  Oftentimes, that makes me easy prey for what is referred to as a “Psychic Vampire”, not a friend.

Why I do this, I don’t know.  Perhaps, it dates back to a dysfunctional childhood where trouble and pain were a daily occurrence?  Or, maybe, it was too much empathy built into me on an instinctive level and magnified a thousand times over?  It may simply be the idea that I’m somehow warped/flawed into believing that by helping others, somehow I’m buying love?  A therapist would likely have a field day with this one but, suffice it to say that if someone is in trouble and I so much as get a whiff of it, I’d be there.

Either I’m noble, kind and generous to a fault or, I’m stupid.

There is a line between helping and being a sucker.  I’ve been the sucker for far too long and for far too many people.  When your friends admit that they know that all that they have to do is to tell you about their problem or give you a sob story and they know that you’ll be there, you’ve gone too far and you’ve become a sucker.

If you’ve never encountered friends, bosses, co-workders and especially family, tell you that, there are signs that will tell you who is using you and who genuinely needs your help.

First, everyone has problems, including you.  None of us on this planet don’t have some sort of problem or another in our lives so, these people whining on your shoulder with their tales of woes, do not hold a monopoly on having trouble in their lives.  Everyone has something that they can whine about.

Secondly, not every whiner wants to fix their problems, surprisingly enough.  Some simply want the empathy, sympathy and attention that it gets them so, all of your energy will be going into allowing these people to suck you dry of your time, thought, energy and emotions while they move onto the next person who will grant them time to hear their problems.  Yes, these people don’t stop at just one person to vent or cry to.  There’s usually a plethora of others they will try with, in spite of their proclamations of “you’re the only person I have to talk to and I can’t tell anyone else.”  Yeah, right.  Try talking to some of their other friends or family members and you can pretty much be guaranteed that at least a few know the same things that you do, with perhaps, a bit of a twist to the details, depending upon that person’s levels of tolerance to drivel.

Thirdly, not everything you hear coming from their mouths or see happening in their lives is real.  Some of it is half-truths, fabricated, self-produced, self-inflicted, or purposely slanted and embellished to garner your attention.  Don’t make the mistake of thinking that they are telling you the truth, the whole truth and nothing but the truth.  Even if they, themselves are delusional about their issues, you are not hearing the entire truth from them in all likelihood.  Serial troubled souls as I call those who seem to never be out of trouble, are rarely ever victims of never-ending and total bad luck.  A lot of the troubles that they allegedly getting into are usually caused or created by or in their own minds then, magnified further in their stories recounted to you.

That’s not to say that people are never in trouble and never need help in some way or another but, if you’re finding yourself faced with someone who appears to constantly be in one problem situation after another, crying on your shoulder by phone, in person or email and you find yourself constantly saying to yourself, “poor so-and-so…they can’t catch a break,” think twice.  There may be more to these people’s problems than you know.

Veronica, a friend of mine, was constantly in seeming bad financial trouble.  She claimed that she couldn’t even put food on her table and was going to lose her house.  Veronica also seemed to get into one bad relationship after another where she was always the one left behind in pain and sorrow.  Her family were all “no good” and wouldn’t help her.  Every friend she ever had (except me of course) had deserted her and weren’t caring people (like I was, of course).  Her children were horrid to her and didn’t care if she dropped dead with all of her health issues and, she never left the house because she had nowhere to go without money, friends, family or help.  She spent every holiday on her own.  She had nothing and no one and proclaimed to want “to die”.

For over two decades, I kept swooping in like a masked and caped crusader, to save her from what appeared to be excrutiating misery, debt, loneliness and even told others in her life off for being so insensitive to her and her needs, giving her money that has yet to ever be able to be paid back as…there was no money coming in.

I took flack from others for “meddling” into their lives when I’d try to talk to them about Veronica and her horrific situations.  I was shunned, talked about and hated by others for what I saw as simply a “duty” to a friend.

As time went by and my own life was fraught with problems, family and other friend’s deaths, financial issues myself and my own set of headaches, I became somewhat crippled within my own life and could no longer do what I used to do for Veronica.  As a matter of fact, Veronica was pretty perturbed that I wasn’t able to be there for her and considered it a “slight” by me, not even giving me the time of day to hear out my problems.  To add insult to injury, just as I could have used a friend, even just to have a coffee with to take my mind off of my own issues, Veronica was off with other people she knew and I didn’t see or hear from her at all.

The separation did me good though.  I eventually started to come out the other side of a really difficult rough patch in my life and had room to think and breathe again before Veronica heard that I was doing better and began to resurface.  At this point though, I had been through enough of Life’s issues to have learned a thing or two about how to deal with those times, issues and most of all, figure out what made people like Veronica tick.  This time, I was prepared to deal with her on both a higher and more solid ground versus jumping into her own, self-created quicksand with her.

One of the things that I learned through my own troubled time experiences is that when you are truly down financially, you do whatever you can or need to do in order to get yourself afloat again.  If that means scrubbing toilets or washing dishes, you do it until something better comes along or until your finances are straightened out.  When I offered information and contacts to Veronica for work to get her some sort of income, she chose not to take any of those opportunities as they “weren’t right for her”.

When I had suffered from panic and depressive episodes, I sought out counselling and offered her the name and phone numbers to several free counsellors and received the answer, “nah…they’re more screwed up than we are.”

In suggesting that her son, living with her, in a beautiful basement apartment in the house that she lived in, either move upstairs into his bedroom again or pay the full rent the apartment could have garnered, she “didn’t want to talk about it” in spite of the bank threatening to take her house for lack of mortgage payments which also meant that her son’s roof would be gone as well.

The romantic relationship she was in was neglectful, bordering on abusive and he was an alcoholic and drug user with no money of his own, often waiting for her to feed him.  She’d constantly cry that there was nothing there, how hurt and angry she was at it all and him.  I obviously, suggested that she end that one and put her energy into her own life first, then look for someone better suited to her.  She pshawed that suggestion by saying, “but, he fixes things around my house for me.”

The list is endless but, by these examples, it’s likely plain to anyone reading this that Veronica didn’t want to help herself in any way.  She also wasn’t telling me the truth or at the least, not the entire truth about everything as I’d catch her in her own lies where she’d try to back-peddle and cover it up with excuses or more lies.

The plain and simple bottom line to Veronica and others like her are that at best, they are stuck and until or unless they truly want to make a change, your help isn’t going to make even the smallest of dents in anything.  At worst, these types of people are out for what they can get out of you in whatever ways that you will allow and for as long as you will continue doing it for them.  They will suck you dry in every conceivable way if you let them because they have no intentions of doing what could or would help them.  In essence, they don’t really want to be helped.  They love living in the drama and getting the attention that it creates for them in suckers like those who will fall for it.

If you truly want to know if your friend or family member really wants help, try offering them up solutions to their problems as a test.  If they constantly have reasons why they can’t or won’t take them or use them, you not only know that you are dealing with someone who cannot be helped until they want out of their issues but, you also know that they’re going to continue being psychic vampires on your time, energy, thoughts and emotions.  Give it up.  You cannot win.  You can only lose.

Go have yourself a coffee and enjoy something in your day because the energy that you’ve spent on these types of people are wasted.  May as well enjoy your own life and solve your own Life Problems as we all must do.

At least, that’s the way that I see things from my little corner of life right now.