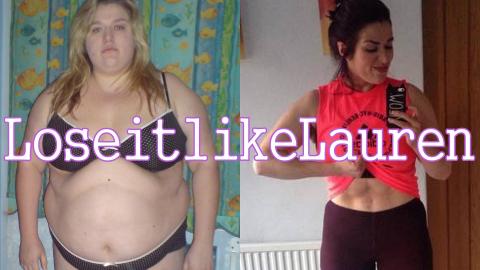 Anyone who has been looking for weight loss tips, will likely have run across “LoseItLikeLauren’s” channel.  This young British woman has lost some 147 lbs, without surgery and without a program. She’s done this all on her own and is to be commended for her achievements, without doubt.

First of all, I wish to express that I really like this young woman and her sense of humour about herself and her entire journey.  She’s truly an inspiration for people of all ages who wish to lose weight but more so, she’s a leader to look up to for the twenty to thirty-something crowd as she was in that age group when she began to lose weight but, now in her 30’s and still making videos weekly with regards to both how she started as well as how she’s kept it off.  In total, her journey has been about 6 years thus far and she’s documented quite a bit of it on Youtube.  Truly commendable.

Where Lauren has started to fall from grace in my opinion is in her obsession with her weight and, in keeping it honest, her lack of a life beyond her weight loss.  Lauren, herself has also commented that she has spent a good portion of the past 6 or more years of her life, focused on losing weight.  She has no job, lives with her mom still, gets depressed and has no lasting relationship in spite of being gorgeous, intelligent as well as intellectual and humorous.  In short, Lauren has created a life around her weight rather than herself and her life beyond weight loss.

For all intents and purposes, someone like Lauren who has focused on her preoccupation with her weight and turned it into her life’s purpose, begs the question of whether she focused on this weight loss because she could find nothing of substance otherwise in herself or her life?

While that may sound like an insult towards this young woman and her efforts, it’s truly not.  At this point in time, Lauren has not moved beyond her initial goal of losing that weight and helping others to do the same.  Her focus has remained on her weight loss even though she has long since lost what she set out to lose.  Though I get the idea that she’s simply trying to motivate and help others to do the same, Lauren has not much else going on in her life in pretty much everything else and has become depressed.  It’s highly likely that she’s also running out of ideas for weekly videos.  They have progressed into more or less whining or even speaking through her depressive, tearful and admission sessions.  Her channel has begun to sound more like a washed up star who is desperately trying to cling onto their glory days but is showing their age and unhappiness.

What’s most disturbing to hear is that Lauren speaks of her former heavier self in Third Person as though she’s totally detached herself from the Plus Sized woman that she was before her weight loss.  She giggles and laughs at herself in her early videos, referring to herself as “she” while crying over what she’s accomplished and how different she is.  At the same time, she’s admitting that she’s depressed, has no life, no job, no relationship and would love to travel, do art and photography but, it’s unclear whether she’s not doing any of this because she can’t afford it financially without working a full time job (something she seems unwilling to do) and while lounging around “mom’s house” as an un-working adult child.

There are a few things that watching Lauren’s videos have brought to mind that everyone should take to heart and think about.

Losing weight won’t make you happy unless you love yourself as you are right now.

There’s no doubt that losing weight is healthy if you’re overweight.  Not many people would argue that point.  However, if you’re thinking that losing weight is the Holy Grail towards feeling happy, think again.  Being slimmer can certainly bring you more energy and help you like yourself better but, it won’t solve all of your problems nor, make you love yourself if you don’t already.  As a matter of fact, you may spend all of your time and energy, putting it into your weight loss and thinking you’ll be happier if you’ve lost that excess baggage but, if you didn’t already love yourself before you started into your weight loss journey, you’re not going to suddenly adore yourself once you’ve lost all of the weight that you’ve set out to lose.  Weight loss adds to your love for self but, it doesn’t create it.  Hating yourself as is means that you’re not going to love yourself once you’ve lost that weight.  Many still see themselves as “the fat person” in spite of the scale, clothing label sizes as well as the mirror image.

You have to have a life and goals whether overweight or slim.

It’s likely obvious that Lauren is making some money off of her Youtube channel videos but, it’s reality that Lauren is not making enough money from that or her part time personal trainer’s position to move out from her mother’s home, sustain herself and she’s not able to sustain a romantic relationship.  No matter how much weight she’s lost, she’s still got issues because she didn’t set up goals for herself within her life or create a full life for herself while losing the weight or even once she had done so.

If you don’t have goals, ambitions or a life and keep those things up, adding to them, your weight loss isn’t going to bring you those things either.  You have to begin those things before, during and after you’ve lost the weight or, you’ll find yourself struggling with depression.  Weight loss is not a magic wand.  You are your own creator of your own show, life and purpose and, that is not dependent upon your weight unless you are so heavy that you can’t get out of a chair or walk out of your home.  Even then, you have to have goals for yourself and your life outside of losing weight.  It cannot be your sole focus as Lauren has done in her own life.

Sadly, we are a society that both adores slim and even thin people while we’ve become an increasingly overweight and even obese society.  Even those who are slim, seem to hate something about their bodies and themselves in this day and age of celebrities, thinness, red carpet looks and plastic surgery.  However to think that your life will be peachy-keen if you were to just lose that extra weight, is naive, false and won’t lead you any closer to being happy than staying heavier.  You may squeeze yourself into a size 0 or 2 now instead of a 20 or 22 but, your problems, issues, lack of self-love and relationships will still be there unless you, yourself, make the inner changes as well to invite happiness into your life.  One look at the celebrities who have had the plastic surgery, walking the red carpet with designer clothing and adoring fans who hunt them down for selfies and autographs will tell you to look beneath the surface.  Many of them, in spite of being stick and bone thin, dressed to the 9’s with seemingly everything at their finger tips, including admirers, have also been in therapy or are self-medicating themselves with prescription or street drugs and dealing with broken marriages, relationships as well as children who have run amok.  Self-love has to come before anything else can make you happy, including losing weight.

While, of course, I wish Lauren every happiness in this world, I also can see a young woman who now has to free herself from making herself, her life and who she is based on her weight loss. She has to venture out into the world and create a life of her own now.  Her weight loss is behind her and while much like an alcoholic, she will likely always have to work on keeping weight at bay, she also has to learn to love herself and move forward and away from her weight in order to be happy in her life now.  It’s just time from what I’m hearing from her in her videos.  She’s not a happy person in spite of losing an entire person’s worth of weight and won’t be contented until she reaches out into the world and does something she enjoys with herself and her life.

Remember: weight loss is a health issue but, it’s only an adjunct to happiness.  If you’re not a happy person to begin with, you’re not going to be a suddenly happy person once you’ve lost your excess weight.  You need to be happy with you as you are right now, at the weight that you are and success in weight loss adds to that happiness but, doesn’t create it.  At least, that’s the way that I’m seeing LoseItLikeLauren from my little corner of life.

7 thoughts on “Lauren Mae, Youtube’s (Lose It Like Lauren) Has Lost The Weight But Still Struggles With Her Life And Unhappiness”

Leave a Reply to A. Stover Cancel reply