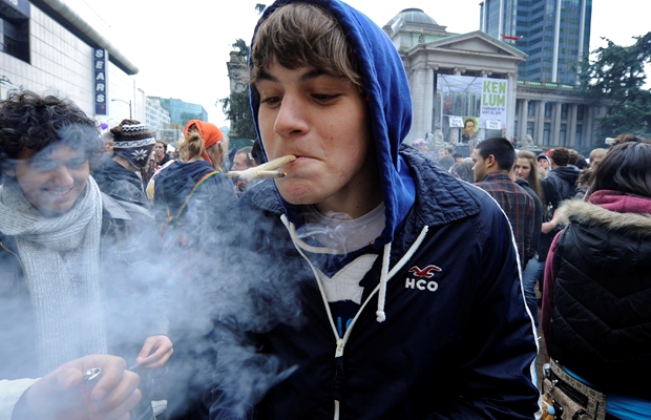 This is a photo of a kid smoking marijuana in Canada…the land where the government does nothing to kids who do this in public but, are banning menthol flavoured cigarettes as an alleged ploy to stop kids from smoking. Make sense to you?  It doesn’t to me.

The Canadian government (and, likely other governments around the world) are determined to “save us” from our health issues apparently.  They are now banning menthol flavoured cigarettes.  Why?  Because they say that menthol flavouring cuts the harshness of cigarette smoking and therefore, appeals to kids.

First off, let’s get this straight.

The Canadian government/Health and Welfare Canada has been alleging to want our welfare/well being in mind in all that they do but, are they really or are they backwards, misguided and have an agenda that has nothing to do with the public’s well being?

Look at the fact that there are many convenience store owners who will sell cigarettes to kids no matter what.  What are they doing to those creeps?  If a kid is determined to smoke, they will find a way to get cigarettes one way or another.  A flavour isn’t going to make or break that idea.  Crack down on the illegal sellers and they stand a bit more of a chance.

Secondly, by removing menthol flavoured cigarettes from the market, Canada’s governments are effectively removing the rights of other adults to have their choice in spite of the fact that kids will smoke no matter what they do or don’t do.

Thirdly, they are toying with the idea of legalizing marijuana, a substance that has been proven to be as dangerous, if not more dangerous than cigarettes.  Not only do joints hold  almost the same number of both irritants and carcinogens during the burning process that cigarettes do but, the smoke is inhaled and held much more deeply than a cigarette.  That doesn’t touch upon the impairment abilities of reefers that now hold equal to or above 40% more THC (the psychotropic ingredient responsible for the high and impairment) than the versions smoked in the 1960’s and ’70’s.  Add to it that there are NO current roadside testing capabilities yet available that will hold up in court on a DUI charge and, you’ve got a recipe for total disaster.  That danger holds not only for the pot smoker but, also for everyone else in society who may fall victim to an impaired person’s ability to cause an accident of one kind or another, vehicular or otherwise.  How caring is that to people’s wellbeing?  It’s not.

Next, we have those who wish to try to quit smoking.  Drugs intended for this purpose such as Chantix, come from Big Pharma and Big Pharma is finding out daily that the list of side effects, including suicidal thoughts and possibly suicides, are possible outcomes for their drugs.  They are a form of antidepressants which doctors are handing out like candy for every ailment from true depression to menopausal symptoms and now, smoking cessation.  While they claim Chantix is non-addictive like other anti-depressants, try coming off of any anti-depressant and see what you face while trying.  It’s hell.

Most of us who have had a few attempts at quitting, know that quit-smoking aids like patches and gums, lozenges etc., are useless as well and another product of Big Pharma which pays governments huge sums of money, not to mention the perks it gives docs for attending seminars, seeing their reps and prescribing their meds (and, yes, they say that it’s illegal but, it happens all of the time still as I have friends who work for doctors and see it happening on a regular basis.  They even look forward to the lunches, dinners, gifts etc that they receive from the Big Pharma reps).

So, what are smokers doing to try to quit?  They’re turning to “vaping” or “E-cigarettes” to get the vapour hit as well as the nicotine and hopefully lower the amount of each as time goes by.  What is the Canadian Government doing?  It’s putting in laws that won’t permit people to smoke these things except in places where regular cigarette smokers can smoke.  If that’s the case, someone who vapes, is simply going to go to the same place people smoke cigarettes and light up a regular cigarette.  Why not?  The government is thereby saying that even vaping cannot be accepted.  Oh, but we’re going to legalize weed and until recently, Ontario Premiere, the great and powerful Kathleen Wynne, was going to allow medical marijuana users to light up wherever they were.  What about their second hand vape/smoke?  She’s seemingly re-thinking this one.

Most of us know that smoking is bad for our health.  If we don’t know, the fact that three quarters of a pack of cigarettes or better, are covered with graphic photos and warnings as well as a little card inside each package, stating that cigarettes are harder to quit than Heroine, might just tip us off to the fact.  We don’t need a mother/father in Canadian governments to ground us or take away our rights to tell us that.  However, the idea that kids can run around with guns, killing each other and innocent by-standers faster than any cigarettes could possibly kill and nothing is being done about that, speaks volumes for the brains that call themselves “governments” in Canada.

Call me nuts but, I’d much rather take my chances that a few more kids might take up smoking (if they can scrounge up the money for the astronomical sin taxes already added to cigarettes) than to take the risk of being shot and killed or permanently disabled by a kid with a gun where nothing or very little happens to them because of the Young Offender’s Act and the “code of silence” where people don’t rat out other people.  I’d also much rather take my chances of a kid taking up smoking than seeing one killed instantly in a car crash by a DUI under the influence of marijuana.

However, that’s just me and my thinking from my little corner of life.