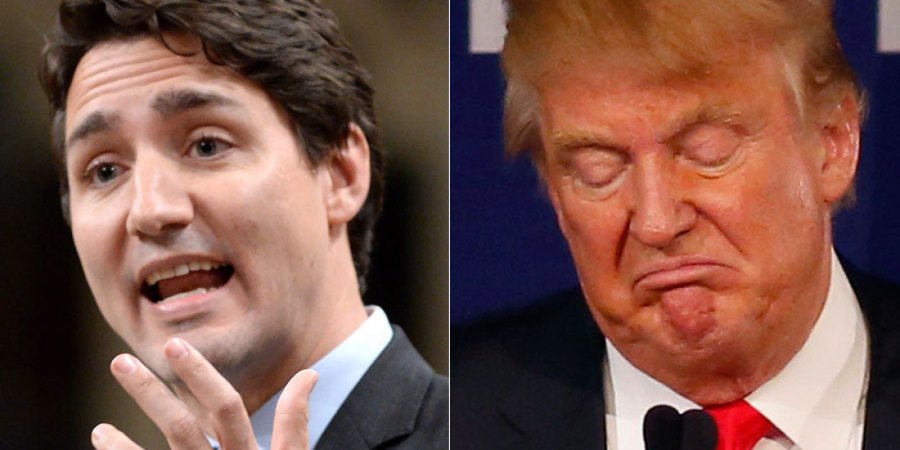 We know that your good looks, charm and ability to awe crowds with your speeches and our money has gotten you as far as The Donald’s rants and lunatic acts have gotten him but, the time has come for you to actually act like Canada’s Prime Minister by standing up for Canadians with Trump at the helm now.

Your endless trips, handing out money all over the globe may have to be curtailed because you have Trump to deal with now and it’s going to take a lot of thinking, not charm or boyish good looks to win this one for the Canadian peoples that you have been sworn in to serve and protect.

It’s a well known fact that Canadians are polite and will try not to ruffle feathers however, that tactic will likely not work on Mr. D.J..  Giving him a congratulations and an extended hand to shake then, traveling off to other foreign countries or yet your 10,000th trip across Canada isn’t going to cut the mustard with a man who has more money than God and a mouth to boot.  Just as you don’t know what you’re doing as Prime Minister because you were never really a politician (no, you can’t count being the son of one), Trump wasn’t either.  Equally, just as Trump got into The White House because voters were fed up with politicians in Washington, you got in because voters up here were fed up with the status quo in the Conservatives.  Oh yes, and your pretty boy smile and muscles and…well….let’s not forget that you have your father’s last name too.

Let’s not forget that Trump is like a bull in a China shop while you’re still playing the role of the nice kid in the playground, giving out candy to be liked.  It isn’t going to work on Trump.  He hates candy and nice kids.  He wants to go out there, build walls around the country and grab women’s p*ssies.  Still want to play ball with him nicely?

Prime Minister Trudeau, do you think that you could grow a pair as well as a real back bone and stand up for the voters in Canada who voted you into office, keeping our rights and wellbeing in mind as you engage in politics with President Trump?  Do you think you could stay in one place long enough (Parliament would be nice) to build a strategy for dealing with Trump when he dumps Canada’s sorry arse into the Atlantic or Pacific ocean or decides that another wall between our two countries would balance out the one he wants Mexico to pay for?  Or, will you simply hand him over the money, straighten your tie, gel your hair and go on with your days in office?  Please don’t try to hone your Twitter skills.  Trump has that down pat already.

Canadians may be a polite bunch, eh?  However, we can guarantee you that there’s enough Canadians who will put on running shoes and march the streets of the major cities in Canada if you aren’t on guard for us.  Despite the cost of gas, our Loonie being worth nothing against the green back, we can still get to those cities to protest loud and clear.  Don’t make us do it, please.