People have auditioned already.  They lined up in groves and they’re nearly done this round of the rebooted competition.

That should be the re-start’s anthem line.

Filming with the judges, should have happened at the end of September yet, they’re still no closer to finding judges than they were months ago.  This is putting Katy Perry, the one judge they’ve managed to secure to the tune of some $25 Million, is getting far too close to her deadline for her much promoted new tour to perhaps, finish the stint.  It was close to begin with in deadlines but, she managed to squeeze it in.  Now, there’s a conflict waiting to happen or, at least, that’s what’s been said by TMZ while others are now stating that it’s been taken care of.

Ryan Seacrest has secured his place back on the Idol stage, set to film in Disney, as host but, Idol executives are or were finding it difficult to land 2 or 3 other judges as the ones that they wanted, want more money than can be afforded.  Worse, they still cannot decide if they want 3 or 4 judges for this reboot but, may have settled on 3.  No one really knows for sure it seems.

TMZ has reported that none of the previous front-runners — Lionel Richie, Charlie Puth, Luke Bryan or Keith Urban  are any closer to signing than they were weeks ago while other sources are saying that they’ve finally secured Richie and Bryan in the nick of time.  Who is right?  It’s looking like ABC has secured it’s panel in the nick of time but, who truly knows for sure? 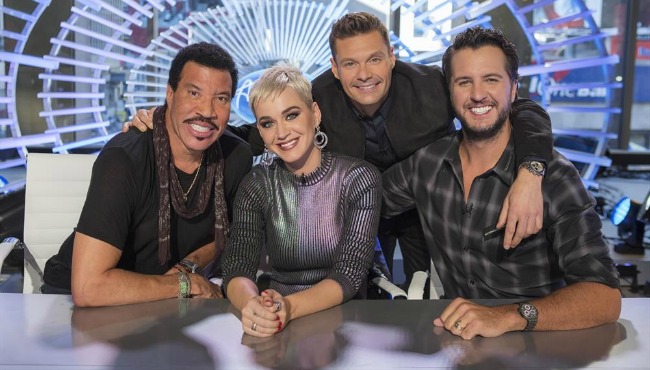 The problem: these stars are wanting bucks….big bucks and to add another dimension, there’s the “racial diversity card” being played as well.  Let’s just say that ABC has been throwing money down the tubes on some pretty dicey shows lately, not the least of which included the remake of “Dirty Dancing” which flopped, big time in both fan’s and critic’s eyes.  Social media exploded with the discontent.  Now this from ABC?

With an air date of March 2018, it’s much like Alanis Morrisette’s Jagged Little Pill to swallow.  The show had died in 2016.  After 15 years of being on air, many judges and format changes, it’s hard to believe that anyone will have much interest in the show’s reboot other than the contestants and former remaining fans plus a few older die-hards like myself, who will tune into the first few shows out of curiosity.  Beyond that initial phase, is anyone’s guess as to how it will fare out with viewership.  My bet/guess, based upon ABC’s previous track record…Idol will be gone after one season and another show will take it’s place in 2019.  However that all depends on how much disposable income ABC has laying around.  I can think of better shows to have rebooted but, Will and Grace are leading the pack in that endeavour on a major network instead of Netflix this time.

Perhaps, viewers are tired of reality, crime, hospital and legal shows so big networks are watching Netflix’s successes in bringing back older shows with reboots of them?  Fuller House and Gilmore Girls are 2 such shows.  Happily, the powers that be, would be right.  Viewers are growing tired of the reality shows as well as cop and detective work shows.  They’ve been done to death (no pun intended…well, maybe just a bit).  I find myself wondering why I’m paying premium pricing for cable or fiberoptic television when there’s little of value on to watch.  I end up spending most of my time watching news or streamed shows on the computer than I do watching my television.  Netflix has become one of my best friends lately with some innovative shows both new and rebooted.

Simon Cowell of X Factor and Britain’s Got Talent fame knew what he was doing when he left Idol years ago now to judge and start the other shows.  As much as I can’t often stand Cowell, I have to give credit where credit is due.  He knew a sinking ship when he saw one and took the first exit out at the first signs of it going down.  He headed for a row boat then a luxury yacht.  Those will only last so long as well but, then again, Dancing With The Stars has been going since The Titanic hit the iceberg so, who can tell?

All of that said now, I will likely tune into the first few episodes of Idol out of pure curiosity as I was once a big fan of the show but, slowly lost interest and quit watching it the last two or three seasons it was aired.  I have no doubt that I’ll likely tune out and watch re-runs of Two And A Half Men, Mike and Molly, Friends or perhaps the old tried and true Mary Tyler Moore Show if I can catch it in time.  I will also keep up to date with “This Is Us” until I can’t handle the depressive side of the show any longer or the reboot of “Will and Grace” which seemed to have seamlessly picked back up right where it left off.  Or, I will turn on The Voice at least for the audition rounds, turning it off when the competition gets going as I usually do.  I’m an odd bird to capture for the networks.  They need to produce something interesting to me, light-hearted and even comical to keep my interest.

Anyone for more Gilmore Girls?  That, I could watch until my eyes fall out and have done so.

From my little corner of life to yours,

Be well, Love and Light