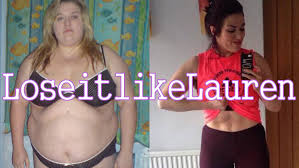 what she’s been up to of late because they have seen things change in her.  In all honesty, I haven’t been to her channel except for once in which to praise her and give her hope.  I doubt that she read what I had to say and in all reality, I really and truly have not been watching her videos until a fellow blogger asked me to watch her latest video.  I did watch it.

First of all, let me say that I see a huge difference in her approach which is making her more 3 dimensional than I’ve seen her be in more recent times where she’s tended to wander, lack content, not be there at all and generally, be all over the map in her ideas, goals and methods.  It’s all lacked perspective and that is what she needed to gather.

Most of us who have attempted to lose weight, know that there are all sorts of reasons for someone having gained weight.  It ranges from physical issues to mental and emotional problems.  None of us are without them and all of us have come to points in our lives where food has acted as a medication so to speak.  It’s mind numbing for those few moments in which we are eating something delicious and takes our minds off of our troubles if even for those few fleeting moments.  However, none of us are truly fixing the problems that we have with eating and we know it.  We’re actually adding to them.  This is what Lauren seems to have grown up and, the pattern of thinking that she seems to have taken on thankfully.  At the least, she seems to have done so in this particular video as I haven’t watched others of hers for quite sometime.

Better known as “Lauren Mae”, YouTube’s “LoseitlikeLauren” seems to have matured in her thinking over time.  One can suppose that it’s due to her possible struggles within herself and she’s what we’ll call, levelling her thinking to one of a more well-rounded and healthier version of it.

While I could go on and on about the changes that I’ve seen in this one video that I’ve watched, I liked what I’ve seen thus far and heard from her own lips and in her own words.  Her entire life is not based upon the false idea that once she gets down to a certain weight, her life will instantly be better.  She seems to have figured out that her size, weight, shape, eating and exercising is not the answer.  One has to love themselves as they are right at this moment.  The rest will follow.

While Lauren seems to live to do her videos as a lot of Tubers seem to do, she also seems to realize how much bunk that there is out there for all of us to see, read, watch and yes, buy.  She’s still using YouTube as a means of support along with another part time job but, she’s seemingly changing as time goes on.  She’s recognizing that Life isn’t about size or shape.  There’s more to it than that.  My hat is off to her for realizing these things finally.

From my little corner of life to yours, as we grow up and get older, we tend to have tried differing things that have taken us down certain paths.  If we can realize that we’re going down a slippery slope of self-destruction, catch ourselves and turn ourselves around, we can start down another path.  One can only hope that Lauren keeps heading down the right paths for her.

*Thanks to my fellow blogger for the push to go in and watch.  I had sworn off of watching anything further until you gave me that shove.  I say that as an older YouTuber myself who has started off onto that rocky and perhaps, dangerous to my mental health road as well.*.

Love and Light, Be Well,